Another slow start for the Royals ended quite differently on Sunday at Spirit Park in Allen.  In a game where the lead changed hands six times, the Royals used the long ball to storm from behind and defeat Greeley’s River Bandits 12 – 8.

Irwin Kaufman led off the bottom of the fifth by drawing a base on balls.  One out later, another walk to Devin Avery brought Max Henry to the plate.  Picking up where he left off last week, the Royals’ slugging third baseman connected on a towering 3-run homerun over the right field fence.  7 – 7.

The River Bandits scratched across one run in the top of the sixth to retake the lead, and the Royals came to bat in the bottom of the frame with only eight minutes left on the clock, trailing 8 – 7.

Greg Oetzmann started the inning with a single and moved to second base on an error, but two fielder’s choices later it appeared the River Bandits’ lead would hold up heading to the seventh inning.  With runners at first and second and two outs, Criswell came to the plate and smashed a single to right center field.  The ball was hit so hard that Oetzmann had to hold up at third base.  Bases loaded, two outs.  Up stepped Avery who had hit the ball hard in his first two at-bats but had nothing to show for it, as both times he hit it into the teeth of that 19-mph crosswind.  But this time, Avery showed more patience, and on a 2 – 1 pitch, he used his powerful swing to blast his only hit of the game – but what a beauty it was – a clutch, two out, grand slam over the left center field fence.  The ball was hit so hard that it had not yet reached the top of its trajectory when it cleared the fence.  11 – 8.  Not to be outdone, Henry followed by dialing long distance with his second dinger of the game – landing in almost the same spot as his first.  Back-to-back round trippers by Avery and Henry made it 12 – 8 and gave the Royals their third and fourth homers of the game.

Avery was the difference maker with his glove, too, as he turned two double plays in the game while the Royals were waiting for their offense to awaken.  In the top of the second, the River Bandits had runners at first and third with only one out when Robert Garcia made a sliding stop of a hard hit smash up the middle, shoveled the ball to Avery, who fired the ball to first to turn the 4–6–3 double play to end the threat and the inning.  In the sixth, after the River Bandits had already scored three runs, Avery caught a screaming line drive above his head, and turned the 6 unassisted double play to end that inning.

In the nightcap, the Royals played a competitive game for all of two innings against Haas’ Bulls before the wheels came off in the third.  For as well as the Royals played defensively in the first game, this game was at the other end of the continuum; a team effort as the Bulls were gifted eight unearned runs in the 17 – 9 loss.

Avery, Henry, and Garcia had two hits apiece to lead the Royals as Avery blasted his second grand slam of the day in the bottom of the fourth. 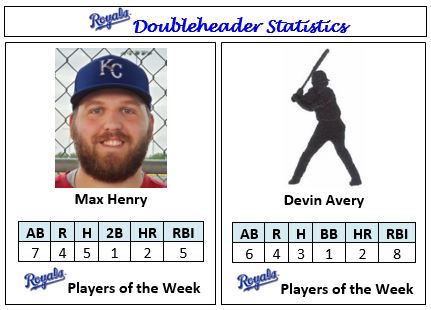