With the wind blowing out on field 6 during their double header at Heritage Yards, the Royals and Hauf’s Astros combined for 17 home runs and 65 runs in 13 innings of slow pitch softball on Sunday morning.  The Astros won game one 19 – 16 before the Royals took game two 20 – 10.

One bad inning out of 13 played was the difference between a doubleheader sweep and split for the Royals.

In the opener, both teams lit up the scoreboard from the first pitch on.  The Astros got out to an early 4 – 0 lead thanks to a grand slam by left fielder, Jordan Allsup, his 15th homerun of the season.  The Royals exploded out of the gate in the bottom of the first scoring six runs; five of them with two outs.  Sheldon Fulton, Robert Garcia, Asher Feltman, and Irwin Kaufman, all contributed clutch two out RBI hits.

After tacking on one more in the second, the Royals took a 7 – 4 lead into the top of the third, where, unfortunately, the Royals continued to be plagued by one bad inning, allowing the Astros to score 11 runs to break open what was a close contest.  Two Royal errors, another grand slam – this time by former Royal Jonathan Braun – followed by solo a shot by veteran, Tim Murray contributed to the Astros’ big inning.

Finding themselves down 16 – 7 heading to the bottom of the fourth, Royals’ slugger, Max Henry – who did not see a hittable pitch in his first two at-bats – belted a towering grand slam just inside the right field foul pole.  Fulton’s second double of the game and Mike Anders’ RBI single added one more run in the inning to make it 16 – 12.  The Royals were back in it.

However, Evan Berkowitz hit a 3-run homerun over the right center field fence in the top of the fifth, giving the Astros their fourth homerun of the game, and three critical insurance runs…which turned out to be the difference in the game.  Spencer Manz dialed long distance in the bottom of the fifth, and Henry went yard again in the bottom of the sixth – a 2-run shot – but the game ended there in the sixth for the Royals with runners at first and third and the tying run at the plate.

After crushing seven homeruns in the opener, the two teams combined to hit 10 more in the nightcap, where the Royals reversed the script on the Astros, jumping out to an early 3 – 0 lead, and then using two big innings to win the game in decisive fashion.

The Royals got on the board in the top of the first when Manz, Brian Criswell, and Reese Leonard singled and scored to start the game.  Homeruns by Justin Reed (his 15th of the season) and Arevalo Gonzalez keyed the Astros’ 5-run first.  After the Royals scratched across one run in the top of the second, the Astros used homeruns by Allsup and  Berkowitz (their second homeruns of the doubleheader) to plate three more in the bottom of the frame, and extend their lead to 8 – 4.

After hitting four round trippers in game one, and now, four more just two innings into game two, it looked like the Astros’ power show was going to enable the Astros to easily eclipse their game one run total…little did they know the time had come for the overdue Royals to launch some fireworks of their own.

In the top of the third, the Royals cycled through the lineup, sending 13 batters to the plate as they scored 10 runs; nine of them coming with two outs.  Back-to-back doubles by Fulton and Garcia opened the inning, but the key at-bat of the inning came two outs later when Jason Hanlin stepped to the plate.  With runners at the corners, Hanlin delivered the clutch, 2-out double off the glove of Reed to make it 8 – 7, and – just as important – turn the lineup over.  From that point on, the Royals were relentless as eight consecutive Royals reached base via clutch hit after clutch hit.  Manz doubled to bring home Hanlin and tie the game up, Criswell singled to plate Manz – and give the Royals their first lead of the game – and then Leonard singled to bring Henry to the plate with runners at the corners.  Similar to game one, Henry did not see a hittable pitch in his first two at-bats.  Showing more patience – on a 3 – 2 pitch – Henry rewarded the Royals’ faithful by unloading his third homerun of the doubleheader; a towering blast over the right field fence, scoring Criswell and Leonard.  According to ESPN’s Homerun Tracker, the 408-foot homer left Henry’s bat at 112.6 miles per hour, and traveled at an absurd 121.4-degree angle.  As Fulton and Garcia opened the inning with back-to-back doubles, it only seemed fitting – on a day where the Royals smashed eight homeruns – that they would follow Henry’s dinger with back-to-back bombs to catapult the Royals to a 14 – 8 lead, and accomplish the rare feat of back-to-back-to-back homeruns.

The Royals brought out more fireworks in the top of the fifth, as Leonard’s 2-run single was followed by back-to-back circuit clouts by Henry and Fulton (their second homeruns of the game) to key the 5-run fifth, making the score 20 – 8.

After failing to score in the third and fourth innings, in the bottom of the fifth the Astros loaded the bases with two outs, bringing Allsup to the plate.  Consider the situation.  Allsup – who did not record an out in the doubleheader – had already gone deep twice, and would mash his third tater two innings later.  With Gonzalez on deck – who went deep in the first inning – the Astros had a great chance to get back in the game.  With the Royals’ outfield 10 feet from the fence for the Astros’ slugger, Allsup connected on Anders’ first offering, crushing a line drive to left field that easily scored the runner from third.  Royals’ left fielder, Fulton, charged the ball, shuffled his feet while transferring the ball to his right throwing hand, and then flung his arm and body at the plate.  From a distance of 278 feet, the ball never touched the ground again as Royals’ catcher and TSSL Hall of Famer, Kaufman, made an incredible stretch down the first base line, keeping his right foot on home plate as the ball sailed into his glove to nail the runner from second base, end the inning, and seal the Royals’ victory. 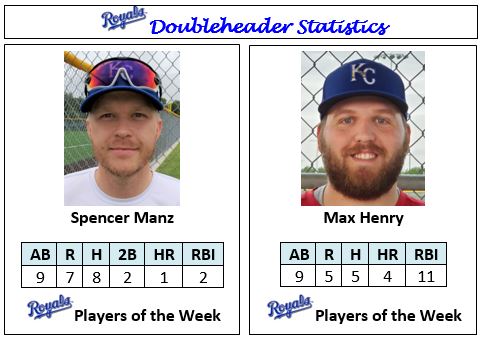