Huge shoutout and thanks to Kelly Welton and the entire Legends Army for the kick ass wrestling artwork and signatures from the team and thank for buying in to the wrestling gimmick and having fun! What a group!! 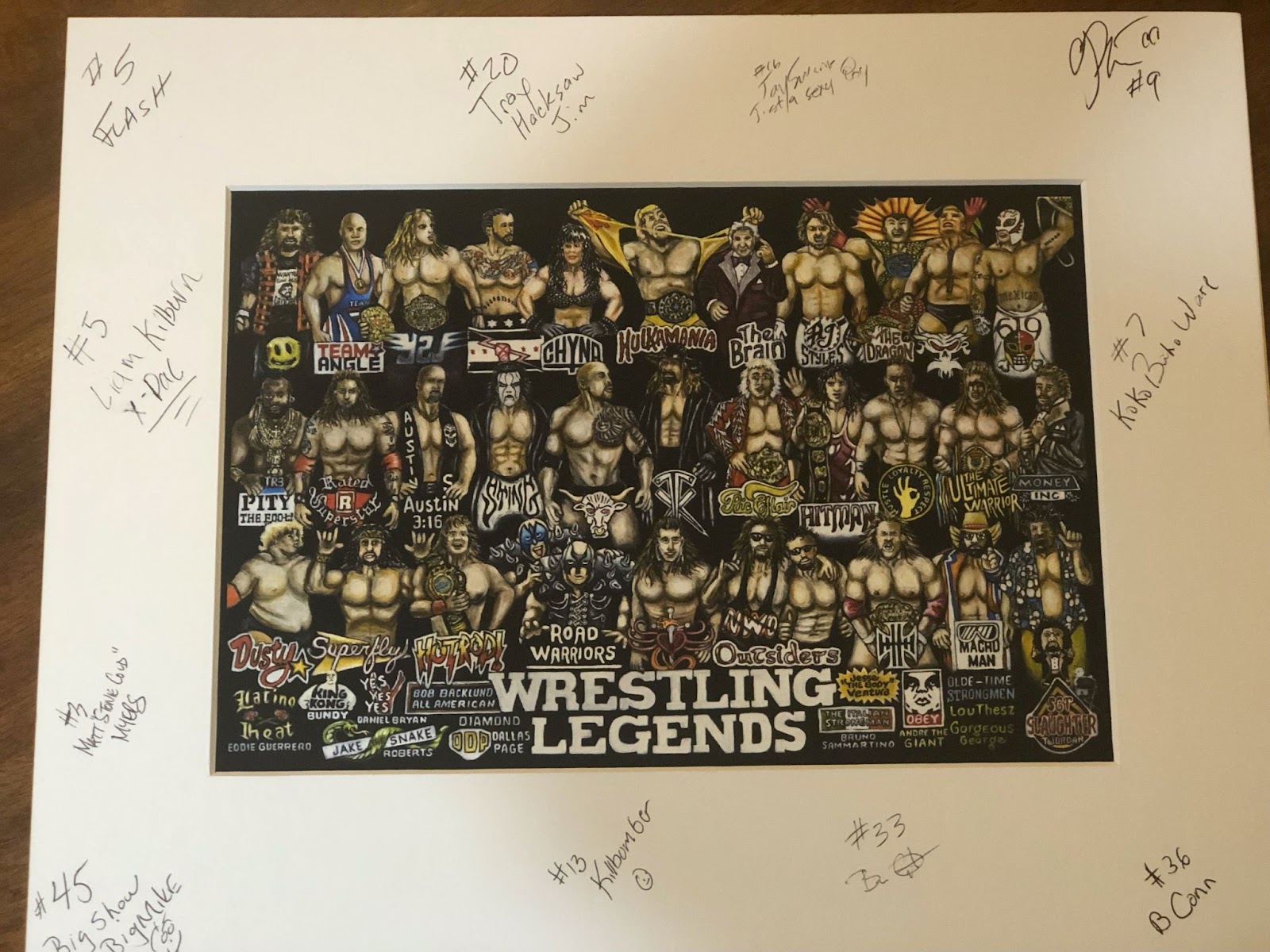 The wind was playing havoc yet again in Allen on field 2 as the Legends Army squared off against the Locos.  A single from “Koko B Ware” Jose Baho started our superstars off right.  Koko would advance on a fielders choice by “Latino Heat” Brian Ortega, and would score on a single from “the Mouth of the South” Jon “Jimmy Hart” Kilburn. That would be all the offense our superstars could muster.  The Locos would come up in the bottom of the first and plate 2.  The score would hold at 1-2 for the next two innings.  The Mouth of the South would get the top of the fourth started with another single, Big Poppa Pump Kyle “Scott Steiner” Kravitz would move him to second, Liam “Xpac” Kilburn would get on with another fielders choice but would move Steiner into scoring position.  Steiner would score on a double from The Big Show, Mike Anders, but before we could plate the second run of the inning a great throw home would get Xpac out a step before the plate.  The Legends would hold the Locos scoreless in the bottom of the 4th and plate 1 on the top of the 5th on a double from “Mr. Perfect” Kelly Welton, a Single from Brian “Gillberg” Conn and a throwing error, that would allow Mr. Perfect to score.  The Locos would remain scoreless and the Legends would come up to bat in the top of the 6th up 3-2. The Legends exploded with a single from Koko, a walk from Latino Heat and an RBI singles from The Mouth and Big Poppa Pump to push the score to 6-2.  The Locos would again remain scoreless, but a 1-2-3 from the Legends would open the door for the Locos in the bottom of the 7th.  In a flurry of hits, error, and general mayhem the Locos would get the score to 6-4 with the tying run at second base a single into the outfield would score the 5th run but a bullet throw from Troy “Hacksaw Jim Duggan” Steele to Gillberg (with a FANTASTIC scoop) would cap the rally and end the inning with our Legends Army victorious.  Final Score Legends 6, Locos 5.

Game 2 would see our superstars move to field 1 where the wind was howling in from right, this time as the home team.  The Pandas would score 1 in the top of the 1st before going down.  Brian “Latino Heat Eddie Guerrero” Ortega would mash one to right and circle the diamond for an inside the park Home Run, boy look Eddie FLYING around the squared circle….  Hacksaw Jim Duggan, Troy Steel would mash a double, setting up The Mouth, Jon Kilburn to score him...but alas the wind would kill a smashed ball to left, which would hold up and be caught at the warning track. Hacksaw Steel would move into scoring position for Big Poppa Pump, who would single to give the Legends the lead 2-1. The Pandas would plate 1 in the 2nd, and 2 in the 3rd making the score 5-2 as the Legends offense sputtered... but after blanking them in the top of the 4th the Legends Army would come roaring back with a 4 run inning with 6 singles in a row from Koko B Ware, Latino Heat, Hacksaw Steel, both The Mouth and Xpac and Big Poppa Pump.  Bottom of 4 score Legends 6, Pandas 4. A scoreless 5th, then on to the 6th inning...the Pandas would plate 1 making it a 6-5 ball game, but the bottom of the 6th would see another flurry of hits from same top 6 batters.  The Pandas would try and mount some offense but would get no runs. Final score Legends 9, Pandas 5.

LEGENDS IMPACT PLAYERS OF THE WEEK

3: Brian Conn as Gillberg 1-5 (single, RBI) phenomenal game saving/clinching pick at home for the final out in game 1 (kudos to Troy Steele for the throw!)