The Royals rebounded from an 18 – 7 loss to Buhrow’s Baby Jays in the first game of their doubleheader Sunday morning to defeat Roth’s Indians in decisive fashion, 20 – 7 at Heritage Yards in Plano.

Thirteen of the Royals’ 37 hits were of the extra base variety, including eight doubles, three triples, and two homeruns.  Royals’ third baseman, Max Henry hit for the combined cycle, in leading the offense with a 5-for-7 performance, collecting one single, one double, two triples, one homerun, and driving in seven.

In the nightcap, 13 of the first 14 batters reached base via 13 hits and a bases on balls in the Royals’ 11-run first inning.  A bases clearing double by Greg Oetzmann and a 2-run triple by Henry, highlighted the inning as Spencer Manz, Brian Criswell, and Reese Leonard all went 2 – 2, with two runs scored, each, in the inning.

Scott Elfenbein’s RBI single started the scoring in the second, while Manz’ 2-run double and Criswell’s 2-run homerun made it 16 – 0.  The Royals’ final two runs came home on Henry’s 10th homerun of the year in the top of the fourth.

In the opener, the Royals stellar defense was the star of the game through the first four innings as the Royals turned three double plays to end the second (5–4–3), third (1–6–3), and fourth (8–4) innings.  However, the Royals had no answers for perennial All-Star, Andrew Williams, who accounted for 11 of the Jay’s 18 runs, with a triple and two homeruns (the last one a grand slam), or the Jay’s bottom of the order which turned the lineup over twice in the fifth and sixth innings.

Elfenbein paced the Royals’ 14-hit attack with a perfect 3 – 3 game, and finished the doubleheader with a similar line score as Henry (albeit without the power :), while Henry, Manz, Criswell, Leonard, and Oetzmann had two hits apiece.

With 14 hits and one walk, the Royals had no shortage of baserunners, but former Royal, Michael Barth, made the pitches he had to make, and recorded critical outs as the Royals squandered multiple opportunities to put the Jays away early on – finishing 4 – 14 with runners in scoring position, and stranding eight – in what was clearly a winnable game. 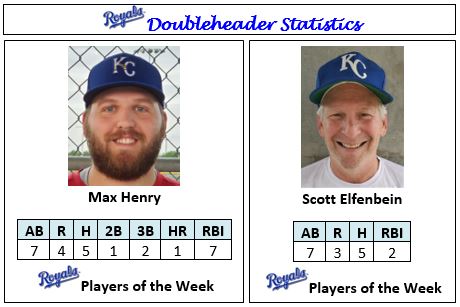