Greetings and welcome to the first-ever edition of the weekly journal that recaps the Leones sport endeavor at the most famous softball league of the metroplex, the TSSL. As first-time subscribers, it is my duty to introduce you to the 3 segments of this write-on which are:

b)  At the diamond – Doubleheader summary of the major ball achievements by the DFW affiliate of the most laureated team in the Venezuelan Professional League, the Leones del Caracas

One can say that TSSL has many key dates to be observed during the season, and you can argue that ‘draft day’ is the fans favorite, but in my opinion, nothing beats the excitement Opening Day brings, as there isn’t anything greater than seeing 192 guys and gals come to the same place to pursuit glory and happiness in a kid’s game.

I’d the honor to witness that yesterday thru many forms – and missed many others btw –, from the future TSSL generation having fun at the Executive Order sign done by skipper Grant Carver to the next level of team apparel by HOF Greg Hurst stach (according to sources it all be gone by week 2) up to see for the first time ever 3 international team names make its debut into TSSL, under the lead of Ariel Rodriguez (Aguilas), Alfredo Sardi (Tiburones) and this humble server (Leones).

As the week’s progress, some championship dreams will start to vanish whereas other will get stronger, but regardless of that what it will never go away is the brotherhood spirit and truly family environment this league brings. Cheers for many years of this!

Getting back into business, after 2 games in the books the big takeaway one can be made about the Leones is the team precisely showed their biggest strength since the 1st inning, a best-in-class defense. Averaging 9 RA per game, turning 4 double-plays, and having 5 shutout innings (out 12 innings in total) speaks volumes about the defensive quality of this squad, and although the week ended into a split, the team left a pretty good feeling of the smart and quality softball it projects to play in the weeks to come

At the first affair against the Miller’s squirrels, a true pitcher duel was at display between HOF’s Barth and Miller with a tie-ball game (7 runs apiece) heading into the 7th inning, where the squirrels took the best out of it with a 3-run rally. But to get there, a few great Leones contributed to this result including Mort 2-key rbi hits, Ovalle’s rbi double (his first career hit in TSSL), and POW recipient Manz with 2 rbi hits.

The second match presented itself as a classic, as for the first time ever in TSSL history two international teams faced each other in a regular-season game, where the Tiburones and Leones took the field to add another epic memory into this well-known Venezuela rivalry. In another close affair, the Leones took the best of this classic by a 10-8 victory, thanks again to HOF’s Barth pitching, the Leones marvelous defensive (led by gold glove 2b Stevie Johnson), and a majestic offensive displayed by POW Manz including a late-inning 2-rbi bomb to take a 10-4 lead, which got shortened by half thanks to a comeback attempt by Sardi’s Tiburones in the bottom of the 5th

Did you know that at the Venezuelan professional league, Tiburones and Leones share the same stadium (see picture below), and a certain type of music known as “Samba” played by the Tiburones fans it is only allowed when they are the home team? 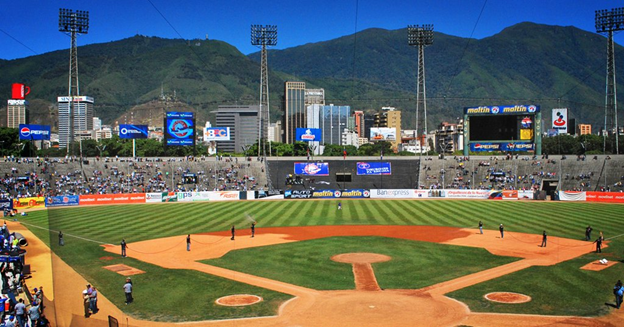