Juleps Joust Their Way to a Sweep! 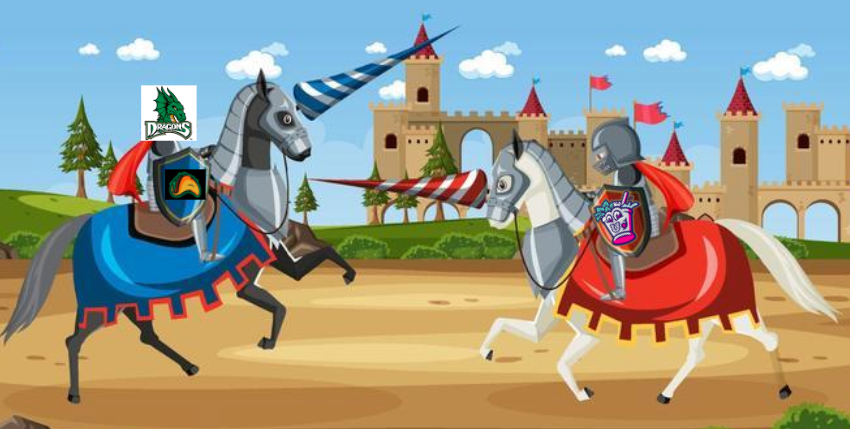 *Insert motivational speech here* Needing to win both games to get back to .500 and secure our spot in the Minis, the Mint Juleps came out strong and ready to battle.

Starting out traveling away to Taco Casa, the Juleps would start things off with a triple by Jockey Dylan Buhrow. Walk by Jockey Captain David Buhrow would lead to a 3RBI homer by Jockey Driggers. Singles by Jockeys Nick Barr and Simo would bring a 2RBI single from Jockey Co-Captain Daniel Buhrow. Juleps would go quietly in the 2nd but 3rd inning would be a different story.

Back-to-back doubles by Jockeys David Buhrow and Driggers and RBI single from Jockey Nick Barr would put up 2 runs. Jockey Simo would single and Jockey Daniel Buhrow would get an RBI double. Walk by Jockey Jody Beasley would bring up a SAC by Jockey Robbie Franklin and a 2RBI double from Jockey Seth “Pepto” Pepkin. The onslaught in the 3rd would continue with an RBI single from Jockey Larry Taub and singles by HOF Jockey Eddie Tann and Dylan Buhrow. 3rd inning would finally be capped with fireworks from a GRAND SALAMI homer by Jockey Driggers.

The 4th inning would show the bats were still hot starting with walks by Jockeys Simo and Jody Beasley. Jockeys Robbie Franklin and Seth Pepkin would get  RBI singles with an RBI double from Larry Taub and a 2RBI singles from Dylan and David Buhrow. Triple by Jockey Driggers would bring up a 2RBI smash by Jockey Nick Barr.

Julep bats would stay hot for game 2 against the Dragons and phenomenal pitching by Babb. Start off with single by Jockey Captain David Buhrow and 2RBI homerun by Jockey Driggers. Double and single by Jockeys Nick Barr and Simo would bring an RBI single from Jockey Co-Captain Daniel Buhrow. 2nd inning would show a double from Jockey Seth Pepkin and an RBI single from HOF Jockey Eddie Tann. Juleps would go quiet into the 3rd and 4th innings, Dragons bats would take off and take the lead.

Needing insurance runs in the 6th with top of Dragon lineup coming up, a walk by Jockey Larry Taub and 3rd double by David Buhrow would bring up a 3RBI homer for Jockey Driggers. Barr and Simo would single but Dragons would get the 3rd out just before time expired. Juleps were able to hold off the Dragons for a 14-13 victory and sweep on the day!

2. Seth “Pepto” Pepkin 3-5 1BB 1-2B 3RBI 1R. Wasn't expecting to pitch and came in and was clutch! Got batters swinging and letting the defense back him up. Stellar performance in the wind.

3.Have to name two because their ability turning over the lineup at the bottom was crucial in both games!

HOF Eddie Tann 3-4 2BB 1RBI and 3R! HUGE play at catcher to prevent a run and bigger lead in Game 2.